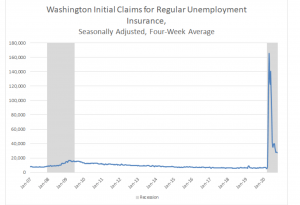 The number of initial claims under the two pandemic programs is a decrease of 1,207 from the number filed during the preceding week.

We estimate that the seasonally adjusted 4-week average of regular initial claims was 27,274 down from 27,756 (revised) the preceding week.

Trends are heading in the right direction, but there’s a lot of ground to reclaim.