Since the Great Recession, the state budget has grown rapidly. Even before the lockdown, it was apparent that the budget adopted in 2019 and amended earlier this year was unsustainable. The state’s strong economy meant legislators had little reason to concern themselves with budget cuts. Now, we’re again hearing themes last sounded in 2008-2013. One big consideration: How much of the state budget is protected from spending reductions.

The Washington Research Council examines the question in a new policy brief. Here’s their conclusion:

The Office of Financial Management estimates that about 70 percent of the 2019–21 budget is protected from cuts. If that is the case, then any budget cuts to offset the revenue effects of the COVID-19-related downturn would need to come out of the remaining 30 percent of the budget. However, these figures are essentially a political construct—the 70 percent estimate includes items that could be cut, though it may be difficult to do so for various reasons.

Indeed, the discretionary parts of the budget did bear the brunt of the Great Recession spending reductions. But even if the state is required to provide certain services, it is not the case that it must always spend the same amount on those services. More efficient delivery methods could be found for many programs, and such changes could reduce the share of the budget devoted to “required” costs, reducing the pressure on the other parts of the budget.

So, there’s more discretion than often believed. But, as the WRC writes, some spending is easier to cut than others. The Council provides this breakdown of the OFM assessment. 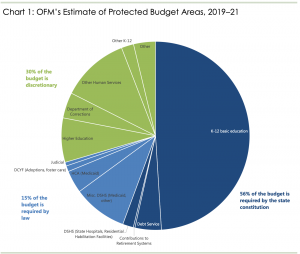 The constitutionally-protected items are basic education (not all K-12 spending), debt service, pension contributions, and state hospitals and residential habitation facilities, with basic education by far the largest share. That’s 56% of the budget. And additional 15% is deemed protected by law. The WRC writes that this includes Medicaid, other required social services spending, adoption support and foster, and judicial agencies.

There are good reasons most of those items are harder to cut than others, though the WRC points out, it’s the services that are protected, not the funding. The WRC provides a lot of detail in the short report, which should be read in its entirety. This graph of spending changes during the recession distinguishes between the protected and unprotected categories of spending. Note in particular the cuts in non-basic education and higher education. 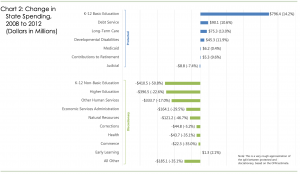 The Seattle Times has two stories examining how the pandemic recession might impact K-12 education and higher education. The ST reports that K-12 faced challenges in the Great Recession, despite constitutional protections. Today’s challenges may be greater.

Since the 2012 ruling in the landmark state Supreme Court school funding case, McCleary v. Washington, dollars for education are not so easily scrapped. Justices ruled the state was violating its own constitution by not providing enough education funding. The result: reforms that legally protect against cuts to “basic education” — an evolving list of programs defined by state lawmakers that includes teacher salaries, some special education programs and transportation. Left most vulnerable are property-poor districts and some programs designed to help populations that need it most.

With so many unknowns — prospects for federal aid, the cost of COVID-19 — others aren’t as optimistic.

“I’m worried that’s wishful thinking,” said Marguerite Roza, a Seattle-based education finance policy professor at Georgetown University. “There is a lot of precedent across the country of the court ordering the state to do things, and the state saying, ‘We don’t have the money.’”

Lawmakers have added more programs to basic education since the last recession — money that comes with stiff protections. The courts have ruled it can’t be cut without a compelling educational reason.

As a result, nearly all of the state’s education budget is “untouchable,” said Schumacher. State education officials estimate this figure at 96%. Several experts say these new protections should prevent slips in funding that defined the last recession.

Washington’s public colleges and universities are bracing for a money crisis this fall that is likely to decimate higher education budgets.

Not only will schools likely lose some students — and the tuition money that comes with them — but the state is expected to slash funding, since higher education dollars aren’t protected by the state constitution in the same way K-12 dollars are.

At risk are efforts to boost postsecondary credential attainment.

[The downturn is]  also playing out against a long-running concern that too few Washingtonians earn degrees or credentials after high school, especially low-income, first-generation and minority students. One business-led group estimates that only about 40% of the state’s high-school grads have earned any kind of postsecondary credential by the time they are 26. It’s a problem the state is trying to mend with a generous financial aid program for low- and medium-income families.

It’s unclear just how much the pandemic is reshaping the economy, but “the vast majority of jobs gained following the Great Recession went to workers with post-high school credentials — degrees, apprenticeships, and certificates,” said Steve Mullin, president of the Washington Roundtable, a group of state business leaders. As the nation’s economy recovers and employers begin hiring again, “a post-high school credential will be essential,” he said.

For most lawmakers, a budget-cutting session is something they’ve not experienced. The Columbian editorial board writes that the process, which they say will begin in the as yet unscheduled special session, must be handled with care.

Lawmakers will look to slash the government’s budget and must consider revenue-raising measures to make up for what is projected to be a $7 billion shortfall over the next two years. That is the preliminary projection; there is no telling how the outlook will be by mid-June, when an official revenue forecast is expected.

Although the unpredictable nature of the pandemic makes it difficult to project the ideal time for Gov. Jay Inslee to call a special session, legislators should prepare to embrace two traits when they convene: Transparency and focus.

As the WRC brief makes clear, budgeting during the Great Recession presented few good choices. While it’s still unclear how state revenues will fare during the pandemic recession – or what the state may expect from federal aid – it is clear that few good budget choices will be presented in the coming year.