Today’s Economic and Revenue Forecast Council meeting brought a lot of bad economic news, amidst great uncertainty as to how and when the recovery begins. Chief economist Steve Lerch led with the adjusted forecast in the initial summary slide. (Here’s a link to the full presentation. TVW coverage here.) 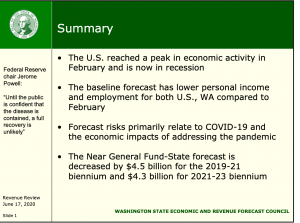 That $8.8 billion drop is significantly more than the previous informal estimate of $7 billion. Lerch made frequent restate to the high level of uncertainty surrounding the forecast, captured in this risks slide. 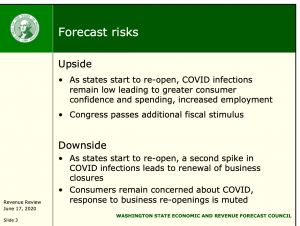 Even with the reductions, as the following slide shows, the ERFC anticipates continued growth in revenue, following the dip in the current fiscal year. 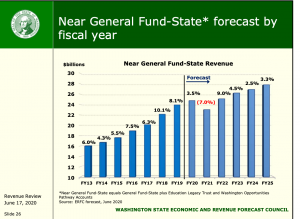 With the forecast in place, a special session will be called. Republican members would like a June session; the Democrats on the ERFC say they should know next week when one might be called. A big unknown: will Congress provide additional financial aid to state and local governments. More later.