Small business hiring slowed in September, according to the latest NFIB monthly jobs report released today. And, again, one of the key factors is employers’ inability to find enough workers with the skills required for the job.

Small businesses created jobs at a steady, yet slower, pace in September despite continued difficulty in finding qualified workers, according to NFIB’s monthly jobs report. Owners added an average addition of 0.10 workers per firm, down slightly from August’s reading of 0.19. Finding qualified workers remains the top concern for small businesses with 23% of owners reporting it as their No. 1 problem.

“Although small business hiring dipped a bit in September, thanks to the lack of qualified workers, many owners are still committed to creating new jobs and raising compensation to attract and retain workers,” said NFIB’s President & CEO Juanita D. Duggan. “Owners want to create more jobs, but fewer did in September, because they can’t find workers to fill them.” 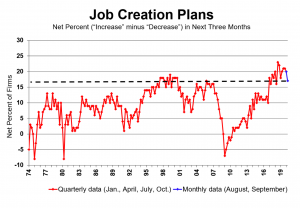 The labor shortage has affected compensation.

Owners are continuing to raise compensation, with a seasonally adjusted net 29% of owners reporting raising worker compensation and net 18% of owners are planning to do so in the next three months.

“Hiring has slowed down, but it’s due to the inability to find qualified workers, not because of a lack of customers,” said NFIB’s Chief Economist Bill Dunkelberg. “The strong labor demand is a clear indication that small business owners are optimistic about prospects for the economy.”

As we noted in the previous post, Washington personal income and hiring growth continues to beat the national averages. But it’s noteworthy that the Economic and Revenue Forecast Council finds that the gap is not as dramatic as it used to be.

Our state will undoubtedly be affected by national economic trends. We should not take our current economic strength for granted.