The U.S. Census Bureau has released the 2017 report on Income and Poverty in the United States. Follow the link to the report, which includes brief highlights.

Economist Mark Perry provides his usual insightful analysis of the data, much of which amounts to very good news. Two key points he draws from the analysis: the middle class is moving up and there has been little change in income inequality in 25 years.

We hear all the time about “rising income inequality” in America (there are more than 100,000 Google search results for that term), about “the rich getting richer and the poor getting poorer,” the “stagnant or disappearing middle class,” all of the recent income gains going to the rich,” the lack of income mobility and other narratives of pessimism… And yet, the data in today’s Census Bureau tell a much different story.

A more accurate description of income inequality in the US would be to say that it has been remarkably stable for the last 25 years.

He produced this chart that supports the contention. 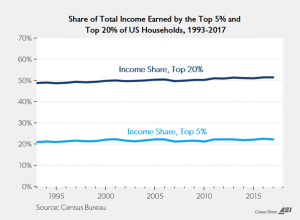 He similarly examines the Gini index, a measure of income inequality, and find it reinforces the stability of inequality over time.

Whether we look at Census Bureau data on the share of total income going to the top fifth and top 5% of American households, or Census data on Gini coefficients for US household income, there is very little statistical support for the commonly held view by the public, academia, and the mainstream media that income inequality has been rising in recent years or decades. A more accurate description of income inequality over the last several decades in the US would be to say that it has been remarkably stable for the last 25 years starting about 1993.

Statistically, the “crisis of inequality” that apparently emerged in recent years simply does not exist. If it’s a problem, it’s been one for some time. Similarly, the “disappearing middle class,” Perry reports, is disappearing in a good way. 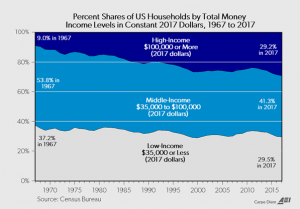 The chart above represents what might be one of the most important findings in the new Census data and confirms a trend I’ve highlighted many times before. Yes, the “middle-class is disappearing” as we hear all the time, but it’s because middle-income households in the US are gradually moving up to higher income groups, and not down into lower-income groups.

We recommend reading the entire post. It’s a clear and positive discussion of some critical economic issues, providing useful context in this campaign year.