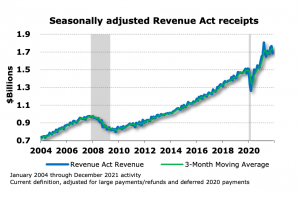 As the graph at the top of this post shows, revenue growth has been strong. Yet, employment is underperforming projections.

We have two months of new Washington employment data since the November forecast was released. Total seasonally adjusted nonfarm payroll employment increased 11,900 in November and December which was 9,700 less than the increase of 21,600 expected in the forecast. Washington employment is now 87,900 (2.5%) lower than at its February 2020 peak. Private services-providing sectors added only 4,600 jobs in the two-month period compared to an expected gain of 18,900 jobs. The manufacturing sector added 3,200 jobs including 1,100 jobs in aerospace manufacturing, and construction employment increased by 2,500 jobs.

At its quarterly meeting [this] morning ERFC will adopt an update to the revenue forecast. For the three months since the November ERFC meeting, collections have exceeded forecast by a total of $452.3 million. Based on this, I would normally expect to see an increase of $0.7 to $1.4 billion to the forecast for the current and following bienniums combined. However, the level of economic risk is much higher now than it was in November, due to the spike in inflation and the prospect of war in Ukraine. Forecasters (and budget writers) should be cautious in light of these risks.