Days after lawmakers adopted a budget that spent most of a $14 billion surplus, the latest update from the Economic and Revenue Forecast Council shows the state economy continued to outperform even the most recent projections.

As the chart below shows, revenue growth has been – and continues to be – remarkable. 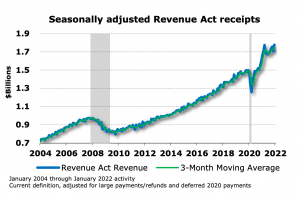 Employment has been recovering, as well. The ERFC reports,

We have two months of new Washington employment data since the February forecast was released. Total seasonally adjusted nonfarm payroll employment increased 35,300 in January and February which was 8,900 more than the increase of 26,400 expected in the forecast.

Washington employment is now 46,000 (1.3%) lower than at its February 2020 peak. Private services-providing sectors added 29,700 jobs in the two-month period of which 10,300 were in the socially-dense leisure and hospitality sector. The manufacturing sector added 2,500 jobs, including 300 jobs in aerospace manufacturing, and construction employment increased by 4,900 jobs. State and local government employment decreased by 1,800 jobs in January and February and the federal government lost 100 jobs.

Washington’s unemployment rate declined to 4.3% in February from 4.4% in January. February’s rate was the lowest rate since the pandemic hit.

All of this comes with a heightened level of uncertainty, as Washington Research Council economist Kriss Sjoblom writes.

…the economic activity driving this collections report predates the Russian invasion of Ukraine. Economists polled by the Initiative on Global Markets at the University of Chicago Booth School of Business expect the war to reduce global growth and raise global inflation over the next year (link here). It will take a month or two for these effects to show up in state collectio