As the graph below shows, the upward trend has been consistent for years now. 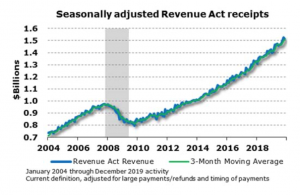 Over the three months since the November revenue forecast, collections have exceeded forecast by $162.4 million (2.5 percent). More than one half of this, $97.4 million, was in real estate excise tax (REET), however. This REET surplus was the result of legislation enacted during the 2019 session under which REET rates applicable to high value properties jumped on January 1. (See pages 4 and 5 our brief on 2019 tax legislation here.) A significant number of transactions were accelerated to beat the rate hike and this effect was not fully captured in the November revenue forecast. ERFC expects the recent REET surplus to be offset by lower REET collections in future months.

Given the modest improvements in the economic forecast and the positive collections experience for non-REET sources, it is likely that February 19 revenue forecast update will give legislative budget writers a bit more money to play with as they write their supplemental budget.

Every million helps. The ERFC notes the continued health of the state and national economies. Of the nation,

Job growth was very strong this month and the unemployment rate remained low, although layoff announcements jumped sharply. Manufacturing activity appeared to end its decline this month, consumer confidence was up and petroleum and gasoline prices were down. For all of 2019, both housing starts and residential building permits were stronger than in 2018.

The U.S. economy added 225,000 net new jobs in January. Employment data for November and December were revised up by 7,000 jobs…

Average hourly earnings increased by seven cents in January and are 3.1% above their year-ago level.

The only shadow falling on the outlook is, as expected, export activity.

Washington exports declined sharply over the year for a third consecutive quarter. Year-over-year exports decreased 23.8% in the fourth quarter of 2019 following a 27.6% decline in the second quarter and a 33.4% decline in the third quarter.

We would expect a trade bounceback in the coming year. And, with all that taken into consideration, Wednesday’s forecast should be up a bit.