The latest economic and revenue update from the state forecast council again finds tax collections coming in above the official June forecast.

That ‘however’ means we can’t take continued strength for granted. Another caution comes in the report’s discussion of national consumer confidence.

Consumer confidence was essentially unchanged this month but remains at a high level. Consumers responding to the University of Michigan consumer sentiment survey reported a mix of both positive and negative expectations, resulting in a slight 0.3 point decline to 97.9 in the sentiment index in July. However, 35% of respondents expressed concerns that tariffs would have a negative impact on the economy. The Conference Board index of consumer confidence increased marginally in July, rising 0.3 points to 127.4. Consumers were slightly more confident about current conditions but slightly less optimistic regarding future economic conditions.

Our state continues to do well.

Total nonfarm payroll employment rose 18,100 (seasonally adjusted) in June and July, which was 6,300 more than the 11,800 expected in the June forecast. Thevariance in employment growth was mostly due to the private services-providing sectors, which added 15,300 jobs compared to 9,400 in the June forecast. Manufacturing employment increased 1,700 in June and July boosted by an increase of 1,300 aerospace employees. Construction employment decreased by 500 jobs while government payrolls expanded by 1,600 jobs.

Washington’s jobless rate in July was 4.6 percent – its lowest point since June 2007 – as strong employer demand continued to outpace growth in the working population.

An estimated 12,400 new jobs were added in July, with professional and business services, retail, manufacturing, wholesale and information leading the way, according to the Washington Employment Security Department.

The map of county unemployment rates continues to show urban-rural disparities, but the improvement is widespread. 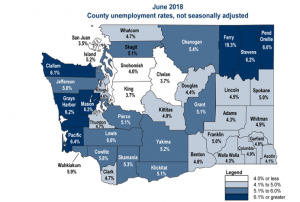 Seattle Times business columnist Jon Talton offers a bleaker look at possible threats on the economic horizon. For now, we remain concerned about trade and tariffs, but cautiously optimistic overall.