Major General Fund-State (GF-S) revenue collections for the July 11 – August 10, 2019 collection period came in $24.7 million (1.4%) below the June forecast, but the shortfall was due to an $83.8 million transfer of funds out of the GF-S that occurred in July instead of in June as expected. Without the transfer, collections would have been $59.1 million (3.3%) higher than forecasted. The transfer moved the remainder of fiscal year 2019 collections of the supplemental proper- ty tax levy to the Education Legacy Trust Account. Cumulatively, collections are now $107.8 million (3.1%) higher than forecasted.

Here’s the collections graph. It’s been a good run. 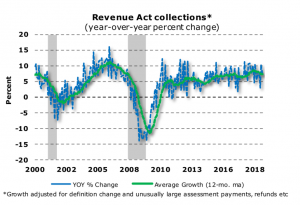 Yet, the troubling economic trends we have discussed also cast shadows on the state economy. The update reports,

Washington car and truck sales declined for a third consecutive month. Seasonally adjusted new vehicle registrations fell 2.7% in May, 3.2% in June, and 3.5% in July. Car and truck sales are down 6.6% over the year and 18.3% since the November 2017 post- recession peak. Monthly sales are erratic but have been trending down since mid-2016.

Of the national outlook, ERFC writes,

National data were once again mixed this month. Consumer confidence improved, layoff announcements dipped and new home sales were up. Job growth was slightly below the average over the last 12 months but still respectable. However, slower GDP growth in the U.S., Germany and China combined with ongoing international trade disputes has led to concerns about future growth.

These early estimates suggest real GDP growth will be around 2% annualized in Q3.