The Economic and Revenue Forecast Council today released its monthly update. As in August and July, it’s mostly good news. Before we look at a few of the details, consider the collections graph below, showing the strong multi-year growth trend. 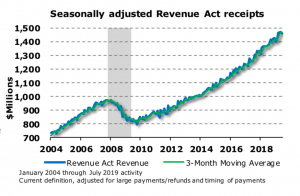 The update briefly reviews economic information for the nation and our state. As we’ve discussed with respect to the ERFC’s economic forecast, the outlook remains mixed. From today’s report:

National data continue to send a mixed message this month. Residential construction and home sales were stronger than a year ago, light vehicle sales improved and hourly wages continued their slow but steady rise. However, job growth was only moderate, layoff an- nouncements were up and manufacturing activity slowed.

We have three months of new Washington employment data since the June forecast was released. Total nonfarm payroll employment rose 20,800 (seasonally adjusted) in June, July, and August, which was 5,200 more than expected in the June forecast. Private services-providing sectors added 15,100 jobs in the three-month period. The manufacturing sector added 2,300 jobs of which 1,200 were aerospace jobs. The construction sector lost 300 jobs in June, July, and August but government added 3,900 jobs.

Washington housing construction increased in the second quarter of 2019 and slightly exceeded the June forecast.

There’s more and we encourage you to read the report. The bottom line for tax collections:

A couple of recent national reports are also positive. Builder confidence is at its highest level for the year, according to the National Association of Home Builders.

Builder confidence in the market for newly-built single-family homes rose one point to 68 in September from an upwardly revised August reading of 67, according to the latest National Association of Home Builders/Wells Fargo Housing Market Index (HMI) released today. Sentiment levels have held in the mid- to upper 60s since May and September’s reading matches the highest level since last October.

“Low interest rates and solid demand continue to fuel builders’ sentiments even as they continue to grapple with ongoing supply-side challenges that hinder housing affordability, including a shortage of lots and labor,” said NAHB Chairman Greg Ugalde, a home builder and developer from Torrington, Conn.

And factory output has turned around and is rising again.

U.S. factory output increased in August at a solid clip, reversing a sharp drop in July, as production of metals, machinery and chemicals all rose.

The Federal Reserve said Tuesday that manufacturing production climbed 0.5% last month, after a 0.4% drop in July.

Despite the improvement, manufacturers will likely continue to struggle. Factories have been hit by the U.S.-China trade war, which has raised their costs and curtailed their exports. Manufacturing output fell in the first two quarters of this year, the first time that’s happened since 2016. In the past 12 months, factory output has dropped 0.4%.

So, again, mixed. The ERFC meets September 25 to adopt the next official revenue forecast.