The latest update from the Economic and Revenue Forecast Council contains a little more good news for state budget writers.

Employment growth in the state has slowed somewhat.

For all the economic upheaval, Washington is faring better than most states.

The BEA released estimates of real GDP for the 50 states and District of Columbia in October. Every jurisdiction suffered a sharp decline in real GDP from the business cycle peak in the fourth quarter of 2019 to the second quarter of 2020. The decline in Washington was 7.7% compared to 10.1% for the U.S. (see figure). Bad as the recession was in Washington, only one state (Utah) and the District of Columbia declined less. Unsurprisingly, the highly tourism-dependent states of Nevada and Hawaii suffered the largest declines. 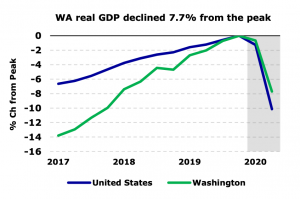 The revenue recovery, of course, has been fueled by the massive federal pandemic stimulus programs. Congress is reportedly close to an agreement on another aid package.