State revenues continue to grow much better than anticipated in the June revenue forecast. The latest update from the Economic and Revenue Forecast Council tells the story of an economy enjoying a bit of a recovery. Whether it is sustainable is another question, one who hope will eventually be answered in the affirmative. Here are the key numbers:

Last month, which also saw revenues beating the forecast, we wrote that the ERFC concern about the sustainability of the trend is justified. We continue to share the concern.

Also, a little perspective is in order, lest anyone believe economic growth will substantially cure the state’s budget shortfall. In June, the forecast council trimmed the forecast for the current biennium – now the current fiscal year – by $4.5 billion and by $4.3 billion for the next biennium.  The hole is deep. As the Washington Research Council reported recently, using numbers that included the July collections update and some other expenditure adjustments, the budget deficit for the end of the biennium ranges from $2.3 billion to $3.3 billion under various scenarios. (We think the fourth column is most realistic.) See the WRC’s chart below. 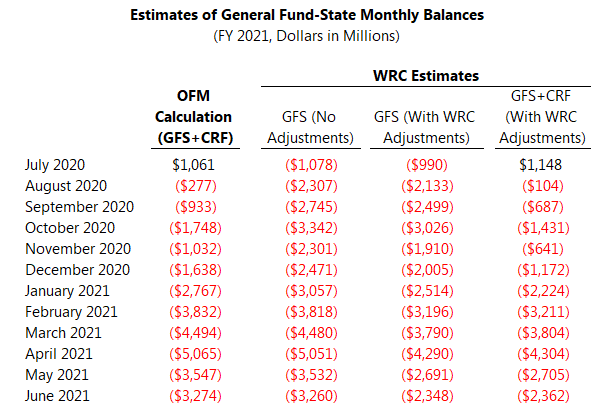 While we welcome the two months of positive revenue news, it does not justify waiting for an economic recovery to significantly reduce the shortfall. The growth obviously helps. The ERFC explains,

Revenue Act collections for the current period came in $349.2 million (29.3%) higher than the June forecast. As can be seen in the electronic filer activity outlined below, most of the unexpected strength came from retail trade. Retail trade payments were up 12.5% year over year while non-retail trade payments were down 13.0% year over year. In June, most counties had reached Phase 2 of the state’s pandemic re- opening plan and several reached Phase 3, which opened up a wider variety of retail stores. It remains to be seen if the increased sales activity will continue or if it represents a short term response to several months of pent-up demand. Payments for June activity from the automobile sector, for example, were up 12.5% year over year, which is likely unsustainable. Due mainly to the unexpected strength in retail trade, cumulative Revenue Act collections are now $596.2 million (24.4%) higher than forecasted in June. (Emphasis added.)

The next official forecast will be September 23. The unpredictable path of the pandemic makes forecasting much more difficult than usual. But, again, we welcome this news. And we continue to believe the Legislature should come into special session to begin the process of revising the budget to reflect the effects of the COVID-19 recession.