The Economic and Revenue Forecast Council has released its latest monthly report. It continues to reflect the state’s generally healthy economy, while sending some cautious signals.

Washington’s unemployment rate edged up to 4.6% in March from 4.5% in February. The rate remains near the all-time low 4.4% first reached last June. The reason for the slight uptick since June is that while employment has continued to grow, the labor force has grown even faster.

After a strong fourth quarter, housing construction weakened in early 2019.

The rear-view mirror confirms that the state has been through good times.

Washington personal income rose to $458.0 billion (SAAR) in 2018 from $428.8 billion in 2017. The 6.8% growth rate in Washington personal income was the largest among the states and District of Columbia and was much higher than the 4.5% growth rate for the U.S. as a
whole (see figure). The difference between Washington and U.S. personal income and GDP growth was mostly due to two sectors: retail trade (which includes electronic shopping) and information (which includes software publishing and other IT services such as internet publishing and web search portals).

Revenues continue to come in at a healthy rate.

So far so good. Yet, it’s worth remembering that the latest monthly report from the Wall Street Journal’s survey of economists finds half of them projecting a recession next year. 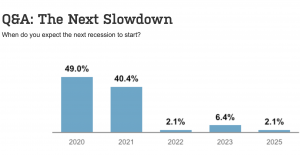 Time to be cautious about future commitments.