For many months, we’ve reported on collections reports exceeding the state budget forecast. Not today. The latest report from the Economic and Revenue Forecast Council shows tax receipts almost perfectly aligning with expectations.

Collections remain elevated, though as the ERFC reports, 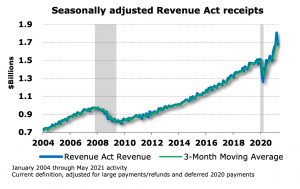 We’ve also become accustomed to writing that Washington’s economic performance was consistently among the best the nation, so this comment in the ERFC report is also a departure.

The Washington Research Council has more.