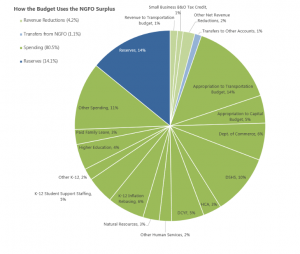 The Legislative session has ended. With more revenues available to them than most lawmakers have ever or will ever see, they passed transportation and operating budgets remarkable in a supplemental year. We wrote about the budget agreements here and here, relying heavily on the timely and thorough work of The Washington Research Council.

At the top of this post, we reproduce the WRC pie char showing how $14 billion is distributed – widely! – in the supplemental operating budget. (WRC post here.)

As we noted in our brief comparing the Senate- and House-passed operating budgets, the surplus in funds subject to the outlook (NGFO) is about $13.8 billion over the outlook period. That does not include the ending balance of the budget stabilization account (BSA, or the rainy day fund), the current balance of the Washington rescue plan transition account (WRPTA, the shadow reserve account), or the remaining general federal relief funds.

The conference committee’s operating budget would use 80.5% of the surplus on new spending. Under the proposal, NGFO appropriations would increase by a net of $5.071 billion. (I wrote about some of the major new policy items here.)

Revenue reductions would use 4.2% of the surplus, and transfers to other accounts would make up another 1.1%. Reserves (the unrestricted NGFO ending balance and the $1.6 billion transferred to the WRPTA under the proposal) would account for 14.1% of the surplus.

Some major NGFO spending items include:

Not all of the policy items – notably the $2 billion for transportation – will have carry-forward consequences, mitigating sustainability concerns. Nonetheless, given the high degree of economic uncertainty attributable to Russia’s invasion of the Ukraine and domestic inflation, which was a problem before the invasion and will be exacerbated by it, sustainability concerns remain valid.

More on all this as additional analysis emerges.