In these still early days in the 2019 legislative session, state legislative committees have explored issues central to our concerning with expanding economic opportunity. Let’s take a minute to catch up on them.

If there’s agreement among policy wonks that Washington’s tax code needs to change, there’s equal disagreement over the nuances of that discussion and what reforms should be made. Those differing perspectives were articulated at a Jan. 24 work session of the House Finance Committee that featured testimony from two state-based think tanks that offered separate recommendations on how to clean up the state tax structure…

The hearing brought out an often-overlooked aspect of Washington’s tax structure that tilt the system toward the regressive side of the scale.

Mercier highlighted several excise taxes that are some of the highest in the country.

And we’d be remiss if we did not again highlight the Washington Research Council’s excellent overview of the state tax structure and its debunking of a prominent study claiming Washington has the most regressive tax system in the country.

For insight as to the perspectives presented by the two think tanks, visit the websites of the Washington State Budget and Policy Center and the Washington Policy Center. Jason Mercier also helpfully posted links to the various segments of his presentation and handouts.

The committee also reviewed a presentation by Headwaters Economics, a Montana-based research group.

Data provided from that presentation is also directly connected to a Senate committee hearing on rural economic development. As The Lens reports,

Though Washington is ranked by WalletHub as having the best state economy in the nation, often lost in the mix is the growing inequity between the rural and urban development. According to Headwaters Economics, 74 percent of all new jobs have appeared in just five of Washington’s 39 counties since 2001, including King, Snohomish and Pierce. Meanwhile, counties such as Grays Harbor have lost hundreds of jobs in the same timeframe.

We’ve embedded the relevant slide from the presentation by Mark Haggerty of Headwaters Economics. 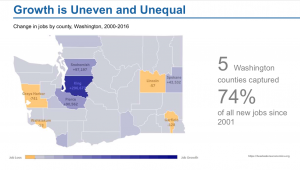 …state senators have proposed a variety of bills to boost rural economic development, including a job tax credit and rural development and opportunity zone funds. Those proposals were well received during a Jan. 24 public hearing of the Senate Financial Institutions, Economic Development & Trade Committee. However, some testifiers stressed the need for long-term solutions to address the regional inequity.

Aside from helping rural communities, SB 5215 is also intended to send a message to businesses still wary after the Seattle City Council passed, then hastily overturned, a $275 job tax. Sponsored by Sen. Steve O’Ban (R-28), the bill would offer a $275 business and occupation (B&O) tax credit for employers that hire a permanent, full-time employee whose pay is higher than the annual average for that county. The tax credit would only be available in counties with unemployment rates 25 percent higher than the seasonally-adjusted state unemployment rate…

A similar outcome is the objective for SB 5423, sponsored by Sen. Guy Palumbo (D-1) and cosponsored by 13 Republicans and Democrats. The bill encourages job growth by creating rural development and opportunity zone funds. Investments into those funds would be eligible for insurance premium tax credits or the B&O tax. As written, 30 out of 39 counties would be considered a qualified area for the tax credit.

It’s early days and we’ve not evaluated the proposals. The problem of struggling rural economies, however, is real and of concern. For background, we’d refer you to our earlier posts on our state’s urban-rural divide and its legislative implications.