In June, the state Supreme Court said it would wait until the end of the last special session to judge the Legislature’s compliance with the McCleary decision. The Court wrote that it would give lawmakers 15 days from session’s end to present a full plan for meeting its requirements. (Remember, the Court found the Legislature in contempt last fall and delayed sanctions pending legislative action in the 2015 session.)

Last week, lawmakers submitted their 39-page report to the court. (We can’t find it yet on the court’s website. Here’s the final draft.) In all, it’s an impressive list of legislative progress in increasing public school funding. For example, as this pair of graphs from the report shows, the K-12 funding boost in the coming biennium is unparalleled. 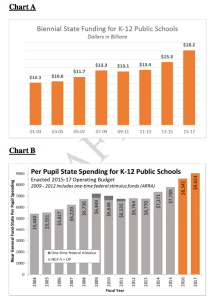 As described in further detail below, the enactments of the 64th Legislature in 2015 demonstrate that the state has implemented SHB 2776, its preexisting statutory plan (which the Court cited approvingly in its 2012 McCleary decision), in compliance with that plan’s statutory deadlines. Further, as also described in more detail below, the Legislature continues to engage in the policy review and consensus-building necessary to enact further basic education funding enhancements related to compensation and levy reliance, the final part of the state’s duty identified in the 2012 McCleary decision. (Emphasis added.)

“Policy review and consensus-building” is another way of saying there’s no agreement yet.

The Seattle Times ran a series of editorials and op-eds discussing next steps. It’s a nice mix of perspectives and prescriptions.

The Walla Walla Union-Bulletin makes an interesting point, one with which many lawmakers agree.

It is up to the Legislature to set the state budget and determine what taxes and fees will be imposed. The judicial branch’s role is to determine if the decisions are made legally and in accordance with the constitution.

The court can let the Legislature and governor know they have not met their constitutional responsibilities, but it must be left to lawmakers and the governor to determine how to address the concerns.

Other coverage at Q13, the Associated Press, and Crosscut.

The Court is expected to review lawmakers’ progress report next week and render judgment soon after.