We get it. Income inequality and a state tax structure that results in lower-income taxpayers paying a higher share of their income in taxes than their wealthier neighbors doesn’t seem right. But restating flawed information year-after-year doesn’t improve the underlying analysis. And the ITEP study on which the “upside-down” claim is based doesn’t withstand scrutiny. Moreover, Washington voters have no enthusiasm for progressive tax reform this year. 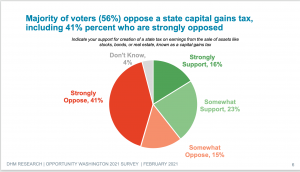 The Washington Research Council comments on the tax structure.

It is true that Washington’s tax structure is regressive—all state and local tax structures are. The Institute on Taxation and Economic Policy (ITEP) ranks state tax structures by their regressivity. Doing so requires a number of assumptions about taxpayer income and spending and about how business taxes are passed on to customers and employees. As such, the design of ITEP’s ranking reflects ITEP’s assumptions and preferences.

That’s fine, but the ITEP report is not a measure of overall taxpayer well-being, nor is it a measure of how effective a tax structure is at collecting revenues.

In 2018 we critiqued ITEP’s report. As we showed, ITEP overstates the tax burden on low-income households, especially in Washington. Further, it completely ignores the highly progressive federal income tax system. When you look at the overall federal-state-local tax system, the tax burden is progressive in every state, including Washington.

Two points there: the state-local tax burden in Washington is overstated (the WRC analysis of why that is so is clear and compelling) and when analyzing taxes, it’s important to look at the entire tax burden, including the feds.

As the WRC wrote in the study referenced,

A fundamental principle of what’s known as “fiscal federalism” is that redistributive tax policies are best enacted on a national basis, one of the justifications for the highly progressive federal income tax. Federal taxes offset regressive state and local tax structures without providing incentives for taxpayers to relocate to reduce their tax liability. Thus, our third point:

3. All state and local tax structures are regressive. But when the steeply progressive federal income tax system is considered, the overall federal-state- local tax burden is progressive in Washngton and every other state, and the differences among the states represent smaller proportions of households’ overall tax burdens.

Advocates of progressive tax reform often sound like they believe tax policy is the only way to address the economic challenges facing lower-income households. The WRC post continues,

A fiscal system encompasses both the tax and the spending sides of government. What we should care about is whether those two functions, taken as a whole, enhance the lives of average citizens.

The Research Council links to a post by state Sen. John Braun, Senate Republican leader which, in addition to providing a good assessment of the ITEP study, argues for “a robust safety net” for low-income people. Washington’s social-service benefits, he writes, are better than those provided in California.

Braun also point out that when you toss out the extremes (where measurement is most difficult), the state tax structure is practically flat.

The cited source for those data: ITEP

The WRC adds that Washington’s tax structure has provided extraordinary economic growth and that the state faces no budget shortfall.

2019–21 revenues are forecast to increase by 10.7% over 2017–19 (not including the $593 million that has come in over forecast since November). Adjusted for inflation, revenues are up 35.3% over the pre-Great Recession high point. (Further, Washington’s current tax structure has yielded the nation’s second-highest revenue growth since the Great Recession.) Meanwhile, enacted 2019–21 appropriations per capita (adjusted for inflation) are 20.6% higher than the pre-Great Recession peak.

even if the state tax system is more regressive than in other states (by ITEP’s measure), it doesn’t mean that Washington’s low-income households are worse off than those in other states (because ITEP doesn’t consider the impact of spending programs).

The progressive tax reform prescription looks much like a cure for a nonexistent problem. Maybe that’s why voters reject it.