Washingtonians think the state Legislature should be able to write a budget without imposing new taxes, according to a new DHM survey commissioned by the Association of Washington Business.

As the chart below taken from the AWB blog post shows, when informed of growth in the state budget, two-thirds of those polled oppose new taxes. 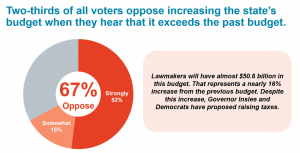 State revenues have increased dramatically on the strength of Washington’s robust economic recovery from the recession. The March forecast added $861 million to the mix. Yet, budgets proposed by the House, Governor, and Senate all include new taxes.

Spending has also increased at a heady clip, up 44 percent in the last decade. That’s before the increases being proposed this session for the coming biennium.

“Washington’s tax revenues have grown substantially since the end of the recession, with the state now projecting collections to top $50 billion for the next two-year budget,” said Association of Washington Business President Kris Johnson. “That means lawmakers have $5.6 billion more to spend on the next budget, without raising any new taxes. It’s clear from this survey that most Washington voters believe this is enough to fund the state’s priorities.”

The statewide survey of 608 Washington voters was commissioned by the Association of Washington Business and conducted April 4-9 by DHM Research. It has margin of error of plus or minus 4%.

Last month, when the new revenue forecast came in we asked, “Is it enough?”

The voters overwhelmingly answer in the affirmative. It’s enough.