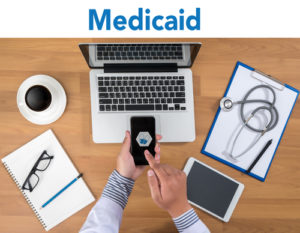 With the future of the Affordable Care Act, which included significant Medicaid expansion, in doubt, state policymakers across the country are considering how changes may affect their budgets and their ability to deliver health care to the Medicaid population. Last month, Stateline reported that Republican states were looking to customize Medicaid expansion, not eliminate it.

Medicaid spending for all states was about $532 billion in 2015, with about 63 percent funded by the federal government and the rest by states.

In expanding Medicaid under the ACA, Republicans in expansion states chose economics over politics, even though it meant cooperating with a law that nearly all conservatives abhor. That calculus won’t change with the transition in Washington, according to Matt Salo, who heads the National Association of Medicaid Directors.

“Not only do you have to consider the ramifications of denying health coverage to hundreds of thousands of constituents, but you have to face down insurance companies, hospitals and other titans of the health care industry, for whom this means disrupted business models and reduced revenue streams,” Salo said.

The new Congress and the Trump administration have promised substantial changes to the Medicaid program, which could give states both new responsibilities and flexibility…

Dr. Tom Price, recently confirmed as secretary of Health and Human Services, will lead the process to change states’ approaches to their Medicaid programs for the administration. His confirmation hearings, which indicated support for converting Medicaid to a block grant, provided a sneak peek at this administration’s likely approach to reforming Medicaid. In addition to block grants, another Medicaid reform known as the per capita cap reimbursement mechanism has gained traction.

To understand these proposals, it first helps to remember that Medicaid currently functions as an entitlement program, meaning that states must cover all people who meet eligibility requirements. The federal government reimburses states a certain percentage of Medicaid costs (which varies by state) for serving all people who qualify.

Block Grants would provide states with a specific funding level for the federal portion of the Medicaid program.

NCSL has several good resources for understanding the options under consideration.

For those who want to chart the growth in the program, a recent American Enterprise Institute essay is worthwhile reading. 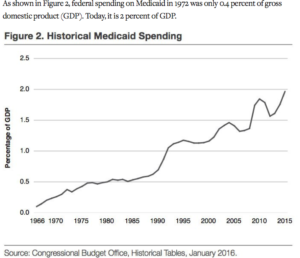 The Medicaid program is an important component of the nation’s safety net. The program serves tens of millions of people who would otherwise struggle to secure access to needed medical care and long-term care services. But it is no longer possible to ignore the immense budgetary pressures the program has created for the federal government and the states. Indeed, state governors and legislators, on a bipartisan basis, have been calling for fundamental Medicaid reform for many years because they see the program crowding out their ability to address other important state priorities.

What is needed is a reworking of the federal-state relationship concerning the program’s financing and governance. The federal government should step back from micromanaging every aspect of program administration and instead provide the overall framework and a predictable funding stream to the states. States should pay for a portion of the program’s cost. They should also be given the freedom and responsibility to make the major decisions over program design and be held accountable for the results.

This may be – probably is – a debate for another legislative session. Washington has long been a health care pioneer, generous with eligibility requirements and expansive in benefits. But the debate will surely come here. Education will be the dominant fiscal issue this year, but health care costs remain central to state budget policy, more so in this time of policy uncertainty.