The lockdown is taking an incalculable toll on the Washington economy, as it is throughout the world. In our state, the unemployment numbers continue to soar. Washington Research Council economist Kriss Sjoblom has produced a powerful chart, showing unemployment insurance claims by sector as a share of February employment. We reproduce it below. 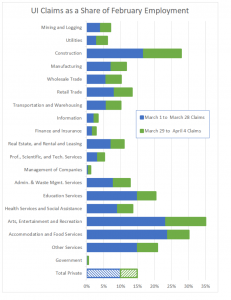 Notice the sectors that have suffered the most job loss: Arts, Entertainment and Recreation; Accommodation and Food Services; and Construction.

In an op-ed in The Seattle Times, Anthony Anton, president and CEO of the Washington Hospitality Association, writes,

As the largest private employer in our state, the hospitality industry and the 296,600 jobs it provides also form the backbone of Washington’s economy. Notably, 40% of our restaurant employees are minorities.

Few sectors drive as much economic value through as far-reaching a web: Our industry forms a hub that links sellers, farmers, distributors, suppliers and service providers, where more than 96 cents of every dollar spent in a typical hospitality business flows right back into the economy. More than one-third of our businesses are minority-owned, and more than 60% of our businesses are women-owned or co-owned. In a single quarter in 2019, before the pandemic hit, restaurants and hotels were responsible for $3.5 billion in total sales in Washington.

His op-ed concludes with specific policy recommendations that will help the industry recover. Among them:

• With little to no cash flow and accumulating debt, hospitality needs relief from — not deferment of — expenses, including tax and utility credits, and rent relief;

• New agency rules and requirements on hospitality must be deferred until businesses are returned to health, and new proposals that would further compound economic harm should be reconsidered;

• Stimulus funding to promote our state’s many great experiences and encourage Washingtonians to rediscover Washington when it’s safe to travel again.

Also, calls continue for getting the construction industry back to work soon, as MyNorthwest reports.

Eagle Creek Land and Development is one of the other groups sending letters to the Gov. Inslee’s office, also asking that private construction to be considered essential.

It says the 24,000 single-family homes built in Washington in 2018 contributed over $8 billion to state’s economy. It also warns that halting home construction will make the current housing crisis worse.

Seattle Times reporter Sandi Doughton takes a deep look at the complex calculations and trade-offs policymakers must consider as they determine when and how to ease lockdown restrictions.

“That’s what a lot of us are working on now: What’s the end game?” said Dr. Elizabeth Halloran, an infectious-disease specialist and modeler at Fred Hutchinson Cancer Research Center who advises the federal government on outbreaks. “What can we do short of keeping everything shut down for 18 months or longer until we have a vaccine?”

With hundreds of new cases still being reported statewide every day, the virus hasn’t vanished — and it never will. Though an influential University of Washington model suggests deaths and hospitalizations may have peaked in the state, lifting restrictions too soon could cause cases to rebound to even higher levels than before, health officials warn.

Testing will be critical.

The basic approach is no different than for any other epidemic: Identify those who become infected, as well as those who have been exposed, and isolate them. But that would mean a massive scale-up of testing and contact tracing, at a time when even nursing homes still can’t get enough test kits and public health agencies are swamped.

There’s much more in the article.

Business will play a critical role in mitigating the economic consequences of the lockdown, writes Ron Mittelhamme, a Regents Professor in the School of Economic Sciences at Washington State University, in a Seattle Times op-ed. He says the “full-stop” policies implemented here and elsewhere must be short-term.

The extension of full-stop policies through April seems necessary given how late, disorganized and ill-prepared we were as a nation in initially addressing the crisis. The extension can be rationalized further as buying time enough for economists, data scientists and other social-science professionals to inform the design of updated policies that address the full range of societal problems this crisis, and the initial policies to mitigate it, have spawned. But they should be short-lived and replaced by more strategic policies that address the full scope of critical societal issues.

Why has there not been sufficient consideration given to tapping into American citizens’ and businesses’ (both large and small) sense of responsibility, ingenuity and entrepreneurial prowess to have them join with government to mitigate the crisis? …Second-generation policies must have the goal of also mitigating the other enormous costs and societal problems that if ignored will plague states and the country for years.

Among other things, an objective of second-generation policies must be to reopen much of the small-business sector (yes, including restaurants, bars, nail salons, dentist offices and casinos). Of course, this could not be “business as usual” — such policies must include new, well-designed and strictly enforced guidelines that support continued mitigation of the virus, and hold citizens and businesses responsible for implementing and adhering to them.

Protection of human life must continue to be the overarching paramount goal of our policies. But we should not accept anything less from our government officials than strategic and well-thought-out comprehensive policies and actions that address the full spectrum of societal impacts of this crisis and that seek to minimize long-lasting, and in some cases irreparable, damage to businesses, individuals, society, our future way of life and the younger generation of citizens among us.

We’re confident that those policies and actions are under active consideration now.