The figures, collected by the federal Bureau of Labor Statistics, show that most counties added jobs during the year, but growth was uneven across the country.

Almost twice as many rural counties proportionately lost jobs in the last year compared to metro job-losers. Nineteen percent of metro counties had fewer jobs at the end of the year than at the beginning. Among rural counties, 37 percent had lost jobs.

The map shows county employment changes. Notice the declines in parts of Eastern Washington. Click through the link to see the interactive data. 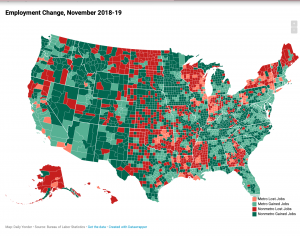 Seattle continues to add jobs at a hot pace.

And there are the losing metros.

But New York may be rebounding slightly. In September, the Daily Yonder found that New York had lost nearly 68,000 jobs.

The county unemployment rate map produced by the Employment Security Department makes the disparity in our state clear. 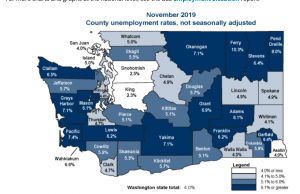