The Association of Washington Business celebrates manufacturing this week, beginning its annual bus tour. We wrote about it in yesterday’s newsletter. AWB writes,

This year’s trip takes on increased importance, as today’s news reports manufacturing faces significant global and national challenges. A critical indicator of the sector’s strength has fallen to its lowest level in a decade.

A gauge of U.S. manufacturing showed the lowest reading in more than 10 years in September as exports dived amid the escalated trade war.

The U.S. manufacturing purchasing managers’ index from the Institute for Supply Management came in at 47.8% in September, the lowest since June 2009, marking the second consecutive month of contraction. Any figure below 50% signals a contraction.

The new export orders index was only 41%, the lowest level since March 2009, down from the August reading of 43.3%, ISM data showed.

This was well below expectations of 50.0%, and suggests manufacturing contracted further in September

And provides an informative graph. 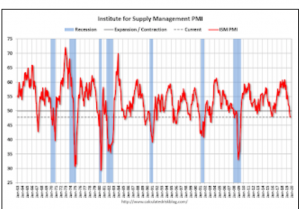 “Comments from the panel reflect a continuing decrease in business confidence. September was the second consecutive month of PMI® contraction, at a faster rate compared to August. Demandcontracted, with the New Orders Index contracting at August levels, the Customers’ Inventories Index moving toward ‘about right’ territory and the Backlog of Orders Index contracting for the fifth straight month (and at a faster rate). The New Export Orders Index continued to contract strongly, a negative impact on the New Orders Index. Consumption (measured by the Production and Employment indexes) contracted at faster rates, again primarily driven by a lack of demand, contributing negative numbers (a combined 3.3-percentage point decrease) to the PMI® calculation. Inputs — expressed as supplier deliveries, inventories and imports — were again lower in September, due to inventory tightening for the fourth straight month. This resulted in a combined 3.3-percentage point decline in the Supplier Deliveries and Inventories indexes. Imports contraction slowed. Overall, inputs indicate (1) supply chains are meeting demand and (2) companies are continuing to closely match inventories to new orders. Prices decreased for the fourth consecutive month, but at a slower rate.

“Global trade remains the most significant issue, as demonstrated by the contraction in new export orders that began in July 2019. Overall, sentiment this month remains cautious regarding near-term growth,” says Fiore.

The Manufacturing Week tour, beginning tomorrow, comes at an opportune time for reminding us all – policymakers especially – of the importance of the industry to our state economy.