Opportunity Washington recently noted that although there is optimism about the economy, small businesses and economists are worried about trade policy. The U.S., Mexico, and Canada may have reached an agreement on a new trade deal, but several countries have imposed retaliatory tariffs on U.S. exports in response to U.S. tariffs on steel and aluminum imports.

A new Brookings Institution report shows how serious such retaliatory tariffs are for many parts of the country. According to the report, China, the European Union, Canada, and Mexico “have now implemented tariffs on about $121 billion worth of U.S. exports. While that number has grown rapidly over the past several months, it still only represents about 6.1 percent of the $2 trillion in total U.S. goods and services exports in 2017.” Brookings finds that regions specializing in agriculture and metals are most exposed to the tariffs. 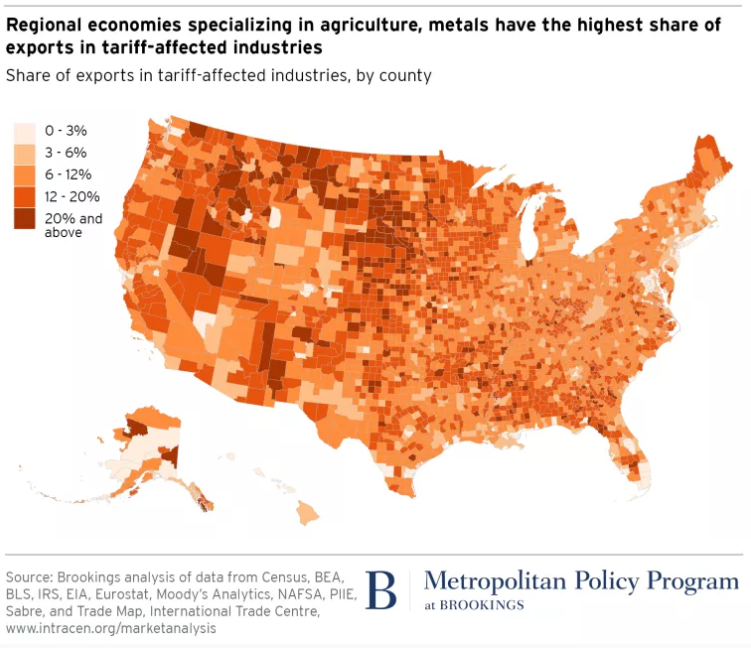 The table below shows how different areas in Washington fare, along with their rankings by group. Of 281 smaller metro areas nationally, Wenatchee has the highest share of exports under retaliation (19.0 percent) and Yakima has the fourth highest (17.6 percent). 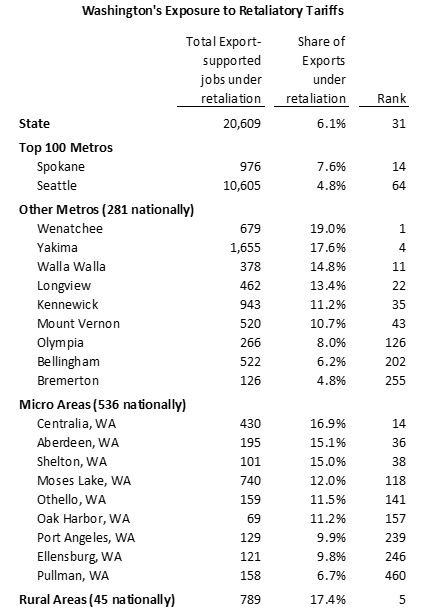 Of course, both Wenatchee and Yakima are important apple producers, and it is harvest time. The Yakima Herald-Republic considers the outlook for the crop this year, given the retaliatory tariffs the industry is facing in China and Mexico:

Amid such uncertainty, the industry is taking comfort that this year’s crop is expected to be smaller compared to past years. The 131 million 40-pound boxes estimated by the Washington State Tree Fruit Association is lower than last year’s crop of 134 million boxes, and well below the record 141 million-box crop from 2014.

The Washington Research Council, a member of the Opportunity Washington coalition, examines how public policy issues will affect business, government, and the community. Research is based on facts from reliable data sources and informed by economic analysis with an appreciation of the power of free markets. Council reports are accurate, relevant, and timely. Learn more at researchcouncil.org.