Regulation has traditionally been an understudied topic among economists because it is difficult to measure effectively, but that’s started to change in recent years. The size, scope, and complexity of federal regulation in the United States, as well as in other countries, is now better documented and, more importantly, quantified in various dimensions.

Mercatus Center researchers have recently undertaken the challenge of providing a state-by-state comparison of regulation. They take a quantitative approach.

To gain a better understanding of the reach of state-level regulation in the United States, the Mercatus Center at George Mason University launched the State RegData project and has gathered and analyzed the regulations of 46 states plus the District of Columbia. (Unfortunately, the regulatory codes of Arkansas, Hawaii, New Jersey, and Vermont were not able to be analyzed owing to data limitations.) Mercatus researchers then used text analysis and machine learning algorithms to quantify how many words and regulatory restrictions each state’s regulations contain as well as to estimate which sectors and industries of the economy those regulations are likely to affect. As in all RegData datasets, regulatory restrictions are a metric designed to act as a proxy for the number of prohibitions and obligations contained in regulatory text, as indicated by the number of occurrences of the words and phrases “shall,” “must,” “may not,” “required,” and “prohibited” in each state’s regulations.

Counting has obvious limitations. A few well-chosen works can shut down a lot of economic activity, while a thousand words may restrict placement of a a floor drain in a commercial garage. But it’s a useful proxy. Last year, Mercatus published a Snapshot of Washington State Regulation.

State RegData also reveals that the 2019 [Washington Administrative Code] contains 196,028 restrictions and 17.3 million words. It would take an individual about 961 hours—or more than 24 weeks—to read the entire WAC. That’s assuming the reader spends 40 hours per week reading and reads at a rate of 300 words per minute. By comparison, there are 1.09 million additional restrictions in the federal code.

That may seem like a lot. It is. But as the map below shows, Washington comes in far behind California and–surprisingly–Texas. 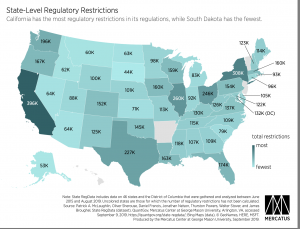 Economic growth through innovation and entrepreneurship is also affected by the state’s regulatory environment. Over the decades, Washington has added new regulatory systems intended to protect the natural and built environment. That said, the Pacific Research Institute ranks Washington No. 42 in regulatory burden on a scale that has No. 1 as least burdensome.29 This is reflective of regulatory regimes that often do not fit well together, multiple layers of regulation, and requirements that contradict one another in intent and practice. Indeed, in 2015 the Washington State Auditor’s Office found that “Washington does not have a strategic approach to identify and prioritize new opportunities for . . . multi-agency coordination.”

Regulatory reform in Washington has been an on-again, off-again priority, as documented in a 2018 Washington Research Council report, which focused on how regulation affected manufacturing. We again commend it to you. The WRC found:

Washington has laws that require analysis and review of regulations, and several governors have made regulatory reform a priority. Streamlining, coordination, and communication have been recurring themes. Efforts haven’t always delivered, though, as the State Auditor’s Office found in a recent series of performance audits.

And not just manufacturing.