Last month, we reported on what we called some economic good news, linking to a New York Times story that said:

The most decisive evidence of improving fortunes is found in new census data released Tuesday showing that median household income rose a whopping 5.2 percent in 2015, to around $56,500.

We also cited this AP story, that stated:

Median household income remains 2.4 percent below the peak it reached in 1999.

Economist James Sherk takes a closer look at that contention and concludes that things are better than reported.

The recession and recovery have been very painful. But most workers enjoy considerably higher incomes today than in 2000. The Census Bureau figures have several shortcomings:

1) They do not adjust for changing household sizes;

2) They measure cash earnings, not benefits, and ignore taxes;

3) They use a less accurate measure of inflation; and

4) They ignore the aging of the population.

The article walks us through the calculations and their effects. He produces this graph: 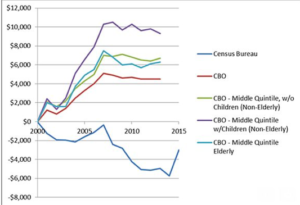 Here’s his take on the data.

Census’s figures show median household incomes fell $3,000 between 2000 and 2015 (after adjusting for recent changes in the survey methodology). The superior CBO estimates show median household incomes rose $4,500 between 2000 and 2013 (the most recent data available). When the CBO updates its figures through 2015, it will show even greater growth.

The demographic distinctions are important. But they don’t capture one consideration we’ve pointed to in the past: Much of the income growth identified in state and national data occurs in just a handful of major metropolitan areas.

Last month we wrote about county employment data, noting the wide variation between King County and the rest of Washington and the outsize effect of the populous metro Seattle region on statewide data. Averages can lead to odd observations and misleading conclusions.

We cautioned about the policy risks associated with assuming things are better than they are.

As we’ve written, the health of the Seattle economy, largely attributable to vibrant tech and professional services sectors, allows the city to experiment with regulatory policies like the $15 minimum wage, paid sick leave and “secure scheduling.” Similar policies would doubtless dampen the economies of communities still searching for recovery.

The examination of the median income data confirms the importance of looking below the surface to consider how public policies benign in some communities can damage others. Washington’s rural counties continue to struggle with high unemployment and stagnant incomes. Lawmakers – and voters on ballot initiatives – should proceed with caution when considering policies that will boost costs and regulatory hurdles statewide. Some can handle them; others cannot.