Metropolitan Seattle ranks No. 4 in a new study of “creative economies” conducted by three economists at Arizona State University. As the Business Climate blog reports,

Knowledge workers are increasingly becoming a vital source of innovation and growth for companies, but the study found few metros that have cornered the market on this or succeeded at building a creative economy with mostly knowledge-based occupations alone.

Richard Florida, who has written extensively about the innovation economy and the “creative class,” points out key findings from the study.

In other words, the places with the most creative economies also have the highest overall diversity of occupations and specialties—by a wide margin.

Florida reproduces the following table from the report. 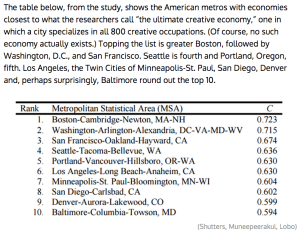 Metro Seattle is among a handful of cities that have succeeded in nurturing a diversified, sustainable creative economy. Florida summarizes the challenge.

It is extremely difficult for other cities and metros to break into the small club of creative leaders. First, they need to excel across the board; their talent pool must be deep with all the skills, creative and otherwise, required for economic growth. Second, leading creative-economy metros must be able to overcome the tremendous forces pulling them away from the creative economy…

“To overcome this pull, and to stay closer to the creative economy,” the researchers write, “a city must continuously attract a net influx of workers with creative skills.” Unfortunately, this outcome is achieved  by a small number of places across the nation.

It’s good to be among the nation’s leaders. The research also serves as a reminder of the importance of strengthening the state’s education system to expand creative opportunity for all Washingtonians.