Seattle gets high marks in the latest “best performing cities” report from the Milken Institute, ranking No. 8 among large cities. 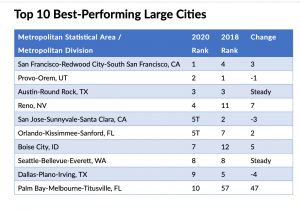 Bellingham also comes in near the top on Milken’s list of best performing small cities. 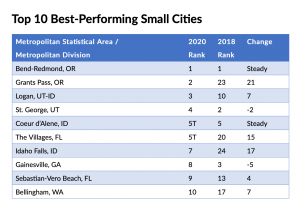 Metrics matter, as we say often. Here’s some of what Milken measures.

We employ the geographic terms and definitions used by the Office of Management and Budget (OMB), most recently updated after the 2010 U.S. census. The OMB defines a metropolitan statistical area (MSA) as a region generally consisting of a large population nucleus and adjacent territory with a high degree of economic and social integration, as measured by community ties.

Employment growth is weighted more heavily because of its critical importance to community vitality, as is growth in wages and salaries because it signals the quality of the jobs being created and retained. Other measures reflect the concentration and diversity of technology industries within the MSAs and MDs.

So, when we say “Seattle,” we mean the Seattle-Bellevue-Everett metro area, of which Milken writes,

Seattle-Bellevue-Everett, WA, remains in eighth place this year, matching its 2018 performance. The overall wage in the metro has increased, which is reflected in its one-year and five- year wage growth rankings. As in the San Francisco Bay Area, the high-tech sector has been fueling the region’s economy; the presence of tech giants, including Amazon, Boeing, and Microsoft, explains the region’s solid performance (third) in our high-tech GDP concentration metric.

As the table below shows, the metro area performed best in wage growth and tech concentration. 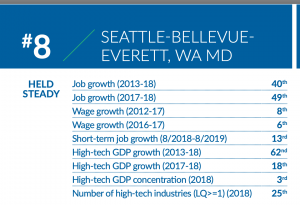 Bellingham, WA, moves up seven spots to round off our top 10 list of small cities. It has impressive performance in one-year wage growth (19th) and excellent performance on the number of high-tech industries LQ (second). Tech companies located

in Bellingham span various industries, including Conversica, an artificial intelligence-based software company; Safran, an aircraft- engine maker; and Emergency Reporting (ER), a cloud-based reporting and records management software company. Safran operates a plant in Bellingham manufacturing aircraft interior products, employing around 500 workers, while ER expects to grow its Bellingham office from 65 employees to 120 in the next few years with investments from Polaris Growth Fund.1

Milken intends for the report to be used by policymakers as a benchmarking tool, one that’s useful in helping identify strategies to bolster economic growth. One of their takeaways:

Regions that better link education and training programs to the workforce needs of employers will attract businesses and create more opportunities for residents. Developing new industries and companies will require fostering entrepreneurship and innovation through research institutions, incubators, and funding programs.

Knowledge-based economies—those with innovation industries and skilled labor at their core—have done well on the Best-Performing Cities Index by adapting to economic and political changes. They take different forms, with some innovation hubs excelling despite high housing costs and a heavy regulatory burden, while others have attracted workers and firms away from the coasts with lower costs of living and doing business.

We’d add that recent tends shown that the high-cost, high-regulation metros are beginning to see slower growth, a trend that is expected to accelerate in the coming decade.