The politics of the minimum wage will likely be with us through the 2016 elections. In Washington, the state House passed a measure increasing the minimum to $12. After a hearing, the proposal died in the Senate.

That doesn’t mean that there won’t be another attempt to raise the base wage here, possibly by initiative. Regardless, Tacoma voters will see at least one $15 minimum wage proposal on the November ballot. And efforts to boost the minimum continue in other Washington cities.

In Oregon, a similar scenario is playing out, as the Seattle Times reports.

House Speaker Tina Kotek unveiled a proposal Monday to gradually raise Oregon’s statewide minimum wage to $13 an hour by 2018 and give local governments the right to go higher if they choose.

The Times reports the bill is unlikely to pass this year and notes ongoing efforts to place a $15 minimum wage on the ballot by initiative.

A timely bit of research from the Federal Reserve Bank of St. Louis examines who’s paid the federal minimum wage. The link takes you to an informative interactive graph. The map below is from the St. Louis Business Journal story on the Fed’s analysis. 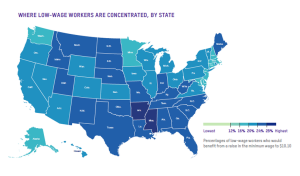 Because many states, including Washington, have established minimum wage levels above the federal rate, the benefits of an increased federal minimum will vary. As the map shows, Washington has among the nation’s lowest concentration of low-wage workers.