The original headline in the Seattle Times is encouraging: State’s unemployment rate edges down to seven-year low. (Since we started writing this, it changed to  “State’s latest job numbers are mixed.”) Both headlines are accurate, but the latter adds perspective.

While the state’s unemployment rate hit a seven-year low, the labor force shrank for the fourth consecutive month and the number of jobs fell.

The state’s September jobless figure was 5.2 percent, according to preliminary seasonally adjusted estimates from the state Employment Security Department.

The jobs picture is more complicated.

The number of jobs, though, on a seasonally adjusted basis, fell by 2,200 from August to September. Those job losses all came from the private sector, while public-sector employment remained the same.

“Hiring across the state took a step backward in September, although forward momentum is still being sustained,” Paul Turek, state labor economist with the Employment Security Department, said in a news release. “Some adjustments in hiring appear to be occurring as employers start transitioning to the holiday season, and some may be due to new challenges presented by global economic conditions.”

“We’re not going into disaster,” he said, adding, “The thinking is that jobs growth will begin to slow.”

…Robert Plotnick, a professor in the University of Washington’s Evans School of Public Policy and Governance who specializes in labor economics, agrees.

“I’m not happy about it, but I’m not worried about it either,” he said of the September numbers. The longer-term trend, he said, is what he’ll be keeping an eye on.

It’s important to remember how the statewide numbers are heavily influenced by the Puget Sound population centers. This map from the Employment Security Department helps remind us of how many parts of the state still struggle. 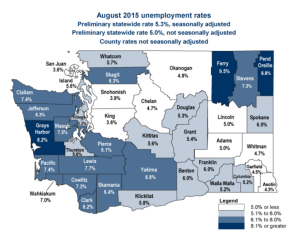 It’s the August map and will be updated soon. But we know we have much work to do before our goal of shared prosperity throughout the state is realized.