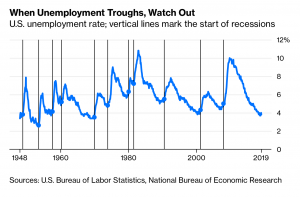 The weak begins much as last week ended: With analysts trying to unravel the mixed signals flowing from recent economic data. We’ll start with the graph above, from a Bloomberg column by Justin Fox, who looks to unemployment rates for signs of a coming recession.

Amid a February jobs report in which an unexpectedly small gain of 20,000 payroll jobs was the big news, the 3.8 percent unemployment rate got less attention…

What might signify something, though, is that the unemployment rate was also 3.8 percent last May, August and October…

So the unemployment rate has been pretty much flat for almost a year. Smooth out the noise using three-month moving averages, and it looks like it might even be trending upward a little.

If the unemployment rate were to rise in the coming months, though, that would flash a pretty big warning signal.

Yes, every recession since World War II has been preceded by or coincided with a trough in the unemployment rate. Since 1957, Federal Reserve Bank of St. Louis economist Kevin L. Kliesen calculated last year, the average lag between the unemployment rate hitting bottom and the start of a recession (as determined by the National Bureau of Economic Research’s Business Cycle Dating Committee) has been 11 months.

There’s more; we recommend the column. Fox acknowledges weaknesses in the unemployment rate as a leading indicator,  concluding with a “but yet.” And, we’ve pointed out, three-quarters of business economists are projecting a recession in the next two years.

Pessimists had a good day Friday as the labor report for February came in at a paltry 20,000 net new jobs even as wages rose at the fastest clip in a decade. The hiring slowdown may be partly a statistical blip, but it is probably also a sign of slower first-quarter growth amid global uncertainties.

The big question is whether the February report is a one-month exception, as happens periodically, or a sign of a more serious growth slowdown. Investors are understandably wary as Europe slouches toward recession, growth slows in China (see nearby), and the Brexit deadline looms without a deal. The yield on the 10-year Treasury has fallen 13 basis points over the last week, and the 2019 stock rally has stalled. The trends on wages and investment should keep the economy going, but the jobs report shows there is less margin to tolerate policy mistakes like tariffs.

…it is important to not read too much into these data, as the labor market continues to be strong overall. The U.S. economy has generated a robust 209,080 jobs, on average, each month over the past 12 months, with manufacturers hiring more than 20,000 workers per month, on average, since February 2017…
Manufacturers are experiencing a tight labor market that is not expected to go away anytime soon, as businesses face concerns about finding the skilled workers they’ll need to continue growing. In the most recent NAM Manufacturers’ Outlook Survey (released earlier this week), 9 in 10 manufacturers expressed a positive outlook for their business—hitting nine consecutive quarters of record optimism—but the inability to attract and retain workers continues to be the top concern for the sixth consecutive quarter. There are nearly half a million available manufacturing jobs in the United States.

Today’s report on retail sales, while a marked improvement on the disappointing holiday sales figures, is nonetheless underwhelming.

Advance estimates of U.S. retail and food services sales for January 2019, adjusted for seasonal variation and holiday and trading-day differences, but not for price changes, were $504.4 billion, an increase of 0.2 percent (±0.5 percent)* from the previous month, and 2.3 percent (±0.7 percent) above January 2018.

U.S. retail sales rose slightly in January after a sharp drop in December, reflecting caution taken by consumers amid a government shutdown and volatile stock market…

The economy has stumbled after healthy growth last summer and fall. Weaker economies overseas, the U.S.-China trade fight, and the 35-day government shutdown dented consumer and business confidence. Economists believe growth could fall to a 1 percent annual rate or below in the first three months of this year.

After December’s report, the growth in sales was welcome.

Gene Balk reports in the Seattle Times that the slowdown has hit metro Seattle.

For the second consecutive year, the number of driver’s licenses issued to new King County residents from out of state declined, according to records from the Washington Department of Licensing.

It’s starting to look like 2016 was peak boom. That year, more than 76,000 licenses were issued to folks moving to the county from somewhere else in the U.S. or from another country…

Overall, we agree with NAM: There’s no need to panic. But there’s plenty of reason to be cautious. And, we hope that caution extends to state budget writers. The beginning of a downturn is no time for major increases in state spending commitments.