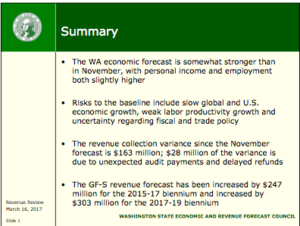 Good news doesn’t become less good because it’s expected. And more than a half billion in new money flowing into state coffers from economic growth is decidedly good news. Above we’ve posted the summary slide from today’s Economic and Revenue Forecast Council presentation.

From the press release:

The upbeat note is followed by a caution:

With the official forecast now in place, lawmakers can put the finishing touches on their budget proposals. The Senate is expected to release its plan Monday.