MoneyTree’s report on Q2 2019 venture capital activity shows the Seattle-Tacoma region ranking in the top 10 in deal activity (No. 5) and investments (No. 6). 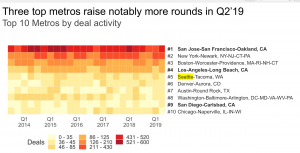 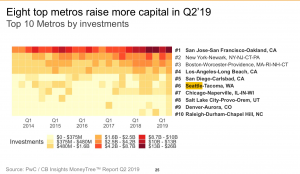 The top-ranked metros are no surprise. As we’ve written before, the Bay Area dominates venture capital funding. In last year’s post, we quoted a CityLab article by urban economist Richard Florida in which he wrote,

Other established tech hubs have failed to keep pace with the growth of leading metros, San Francisco and New York. Seattle, remarkably, saw virtually no growth in its venture capital over the past decade, while both Silicon Valley and Washington, D.C., saw growth of roughly 60 percent, a far cry from the 400-plus percent growth in San Francisco and 500-plus percent growth in New York. And while “rise of the rest” metros like Charlotte, Nashville, Pittsburgh, Portland, Dayton, Huntsville, Tampa, San Antonio, St. Louis, Cincinnati, andSacramento, did see considerable growth in venture capital investment in their startups, together, they accounted for less than three percent of U.S. venture capital investment in 2017. (Emphasis added.)

Second-quarter reports on venture capital show this mother’s milk of new companies is still going strong, at least in tech hubs that include Seattle. Still, the results are uneven.

The MoneyTree report from PwC and CBInsights showed that Seattle-Tacoma ranked fifth nationally in deal activity, at 45 in the quarter. It was sixth in investment totals, at more than $669 million…

Despite all that, Seattle and Washington face serious competition for all stages of venture funding.

In the second quarter, the leaders in deal activity were the Bay Area, New York City-Newark, Boston and Los Angeles. Those four, along with San Diego, also topped this region in investments.

The state and region remain highly competitive, in an arena dominated by a few top players.