The Washington economy remains strong, according to the latest monthly report from the Economic and Revenue Forecast Council. Here’s the bottom line on revenue collections:

Washington continues to outperform the nation.

In September, after the forecast was complete, the U.S. Department of Commerce, Bureau of Economic Analysis (BEA) released state personal income estimates for the second quarter of 2019. According to these estimates, Washington personal income rose from $485.9 billion (SAAR) in the first quarter to $494.2 billion in the second quarter. The reported 7.0% growth rate (SAAR) in Washington personal income was the 3rd largest among the states and District of Columbia and exceeded the 5.4% growth rate for the U.S. as a whole. 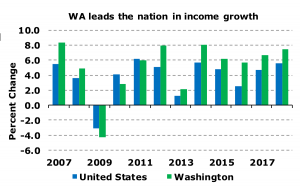 The September forecast, you’ll remember, was largely unchanged from June. We summarized it this way.

The bottom line: Up a bit this biennium, down a very little for 2021-2023. Our takeaway: Uncertainty remains elevated, a slowdown is coming, and lawmakers should exercise fiscal restraint in the 2020 legislative session.

Of the state economy, this update reports,

Total nonfarm payroll employment rose just 1,700 (seasonally adjust- ed) in September, which was 3,200 less than expected in the September forecast. However, the difference was mostly due to government employment which declined by 1,900. This was 2,800 worse than the 1,000 increase expected in the forecast. We believe the drop in government was due to a seasonal adjustment problem with state government education which artificially increased the level of employment the month before. Without the swing in state education employment, total government employment growth and total payroll employment growth would both have been very close to the forecast. Private services-providing sectors added 2,900 jobs in September. The manufacturing sector added400 jobs of which 200 were aerospace jobs. The construction sector added 300 jobs in September.

So far, so good, but the forecast’s warnings of a slowing economy remain valid.