State revenue collections continued to exceed projections last month, according to the latest update from the Economic and Revenue Forecast Council.

Revenue Act collections for the current period came in $33.1 million (2.0%) higher than the November forecast. During the period, there was a net of $13.4 million in large one-time payments and refunds that were not included in the forecast. Without these net payments, collections would have been $19.7 million (1.2%) higher than forecasted.

The BEA released estimates of real GDP for the 50 states and District of Columbia in October 2021. As of the second quarter of 2021, Washington real GDP was 4.9% higher than at the business cycle peak in the fourth quarter of 2019. This was the best performance among the 50 states plus District of Columbia and exceeded the U.S. average of 0.9% for the U.S. by a large margin (see figure). 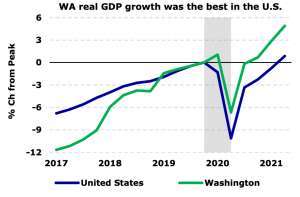