The Economic and Revenue Forecast Council released the last official revenue projections for 2018. And, as expected, it boosted expectations. While this increase may be seen as rather modest, the cumulative trend is impressive. From the press release.

The growth has been remarkably consistent. 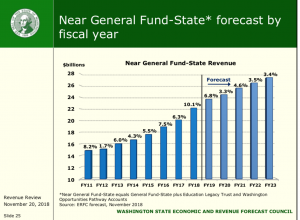 From the concluding slide in the presentation,

• As has been the case for some time, Washington’s economy is continuing to outperform the nation

This forecast frames the governor’s budget, which will be released next month. Add a strong state economy to the list of things to be thankful for this year.