Adding to the fog is this: The National Association of Business Economists reports that 74 percent of NABE members predict a recession by the end of 2021. The NABE graph breaks it down: 2 percent see a recession this year, 38 percent in 2020, and 34 percent in 2021. That looks like an improvement from February, where 10 percent forecast a 2019 recession and 42 percent saw one coming next year. 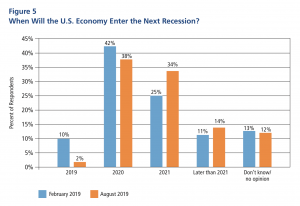 And that squares with the NABE interpretation:

In February, 77% of the economists expected a recession either this year, next year or in 2021.

A strong economy is key to the Republican president’s 2020 re-election prospects. Consumer confidence has dropped 6.4% since July.

Americans’ confidence in the U.S. economy improved in July, with Gallup’s Economic Confidence Index rising seven points to +29. The latest index is the highest Gallup has measured since February.

The recent trend has been positive.

As the AP writes, consumer confidence is key to prolonged economic growth.

Low unemployment, rising wages and easy credit have given consumers the confidence and ability to spend in recent months. That has proved crucial as spending by U.S. businesses has declined, U.S. manufacturing has fallen into a funk, and the economies of many other large countries, including Germany, have begun to shrink.

The strength of the consumer has convinced many business leaders that the U.S. economy won’t go into recession anytime soon…

Caution in fiscal policy continues to be a good idea. But there’s also reason to be concerned about overly negative assessments about the national economy.