Washington ranks among the in-migration winners, with more people moving in than out in the last year, as we reported earlier. That earlier post relied on Census Bureau data and some economic interpretation from economist and American Enterprise Institute scholar Mark Perry.

The Tax Foundation recently explored the same territory, using information from United Van Lines. As the TF map below shows, Washington ranked 7th in inbound migration as a share of total moves. 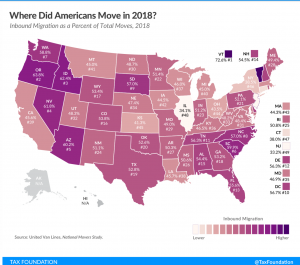 States compete with each other in a variety of ways, including attracting (and retaining) residents. When states experience sustained periods of inbound migration, greater economic output and growth can be expected to follow. However, prolonged periods of net outbound migration can put a strain on state coffers, contributing to revenue volatility as economic activity and tax revenue follow individuals out of state.

Our State Business Tax Climate Index uses over 100 variables to evaluate states on the competitiveness of their tax rates and structures. Five of the 10 worst-performing states on this year’s Index are also among the 10 states with the most outbound migration in this year’s National Movers Study.

For perspective, Washington ranked No. 20 on the 2019 State Business Tax Climate Index.

The 2018 National Movers Study provides a useful interactive map, indicating why people are moving. Here’s part of the Washington snapshot. 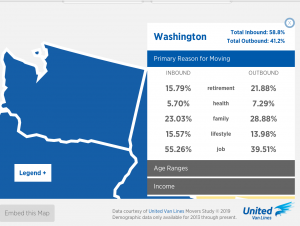 Notice the big gap between the 55 percent inbound moves for jobs versus the 39 percent outbound. Our state remains a draw for job seekers. And, as we wrote earlier,

As lawmakers return to Olympia later this month, they may be well advised to consider the policies that allowed our state to be a desirable destination for employers and those seeking economic opportunity. It’s clear that the competition is intensifying.