A couple of new reports add to our concern that economic growth has slowed. Earlier, we’ve written about heightened expectations for a recession in the next two years, downward revisions in Q1 growth projections, and the continuing urban-rural economic divide.

Now, the Puget Sound Economic Forecaster (subscription required) provides a table showing the metro Seattle economy is also poised for slower growth. As the PSEF-produced table below shows, although the region is expected to continue to beat the US economy, employment and income growth expectations for 2019 are well below the growth rates in the few years. Remember, metro Seattle accounted for about 63 percent of the state’s net employment increase last year. 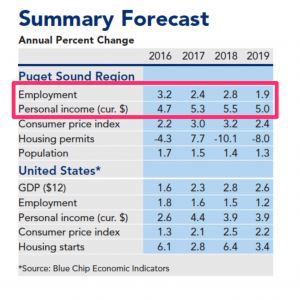 Another caution flag comes in the form of ADP’s small business hiring report. As reported by the Associated Press,

Small business hiring slowed dramatically in February, a sign that company owners may be getting cautious about the economy.

That report comes from payroll provider ADP, which said Wednesday its customers with up to 49 staffers added just 12,000 jobs last month, down sharply from 107,000 in January and 84,000 in December…

The AP notes that the report may be revised, as have been the last two monthly reports.

Still, the erratic pace of hiring shows that small business owners are sticking to a strategy of hiring only when their revenue justifies the added expense and risk. It also reflects the slippage in owners’ optimism that has been seen in recent surveys.

Finally, the Beige Book published by the Federal Reserve System also describes an economy running out of steam. From the national summary (emphasis added):

Economic activity continued to expand in late January and February, with ten Districts reporting slight-to-moderate growth, and Philadelphia and St. Louis reporting flat economic conditions. About half of the Districts noted that the government shutdown had led to slower economic activity in some sectors including retail, auto sales, tourism, real estate, restaurants, manufacturing, and staffing services. Consumer spending activity was mixed across the country, with contacts from several Districts attributing lower retail and auto sales to harsh winter weather and to higher costs of credit. Manufacturing activity strengthened on balance, but numerous manufacturing contacts conveyed concerns about weakening global demand, higher costs due to tariffs, and ongoing trade policy uncertainty. Activity in the nonfinancial services sector increased at a modest-to-moderate pace in most Districts, driven in part by growth in the professional, scientific, and technical services sub-sector. Residential construction activity was steady or slightly higher across most of the U.S., but residential home sales were generally lower. Several real estate contacts noted that inventories had risen slightly but remained historically low, while home prices continued to appreciate but at a slightly slower pace. Agricultural conditions remained weak, and energy activity was mixed across Districts.

Employment increased in most Districts, with modest-to-moderate gains in a majority of Districts and steady to slightly higher employment in the rest. Labor markets remained tight for all skill levels, including notable worker shortages for positions relating to information technology, manufacturing, trucking, restaurants, and construction. Contacts reported labor shortages were restricting employment growth in some areas.

All of which reinforces our concern that lawmakers adopt a sustainable state budget, mindful of the likelihood that revenue growth will be slower in the next few years. And, as we’ve mentioned before, fiscal sustainability carries with it an appreciation that raising taxes on employers risks depressing investment and employment growth.

The Washington Research Council has recently posted on prospects for the state budget.

Working from the November outlook and accounting for all available resources (including the collections increase and the impact of the two bills) the estimated unrestricted ending balance increases to about $1.3 billion.

If you assume that the Legislature will fund the collective bargaining agreements with state employees and non-employees who bargain with the state (which would increase spending by $652 million) and the new system for school employee benefits (which would increase spending by $646 million), the unrestricted ending balance would be negative $46 million.

Given all this, it is unlikely that the Legislature will have trouble funding the maintenance level. But its ability to increase spending for new policy items will be informed by the March revenue forecast, which will be released March 20. Regardless, the Legislature should be cautious about new spending.