In the Everett Herald, Jerry Cornfield reports that the legislative majorities are getting closer to decisions on new taxes and increased spending.

Democratic legislative leaders are gearing up for one of the most challenging conversations this session: taxes.

With control of the state House and Senate, their members are bent on using the next state budget to make a dent in curing social ills, correcting economic wrongs and combating climate change.

He runs down a list of priorities with a price tag far beyond the considerable growth in state revenues already anticipated. Then,

Democratic leaders of the two chambers aren’t ready to come right out and say they intend to raise taxes. On Tuesday, they did provide reporters with a chart showing why they think there might be no other choice.

It shows that revenues are expected to reach $50 billion for the two-year budget that begins July 1 but the cost of continuing current state programs as-is, plus the tab for McCleary school funding commitments, adds up to $51.1 billion.

Let’s put that all in perspective. Since 2008, state spending has increased 44 percent. On top of that growth, Gov. Inslee proposed an additional increase of 22.3 percent, relying on a new capital gains tax, increased real estate and B&O taxes.  The $51.1 billion Cornfield cites is below the governor’s $54 billion; as expected the governor’s budget is the high-water mark (at least so far). Still, as Joseph O’Sullivan reported in the Seattle Times more than a month ago, the majority came in with high expectations that would trigger even higher spending increases.

Many of those legislators are walking into the 2019 legislative session fired up over what they see as President Donald Trump’s adversarial presidency and eager to mold Washington into the more progressive version they have talked about for years.

Many state  Democrats in recent years have proposed or campaigned on implementing a capital-gains tax, passing aggressive policies to fight climate change, expanding health-care and education programs and spending more on social programs.

Yet, many of those plans were blocked in closely-divided legislative chambers. O’Sullivan’s January article quotes the governor on this year’s changed circumstances.

The troops may have arrived just as the booming state and national economies are about to experience slower growth, with many economists, business leaders financial analysts warning of a recession in the next two years, that is, during the next budget cycle.

A little more perspective: Washington’s revenue growth has far exceeded that of most states. A new interactive tool from Pew Research allows tax trend comparisons between states. The graph below compares Washington with U.S. states overall. 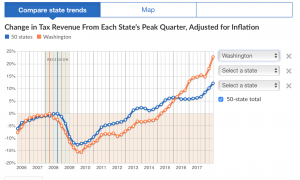 As the nation and our state head into a slower-growth economy, compounding the 44 percent spending growth over the last decade with significant new increases poses a risk to Washington’s financial stability. The state’s budget sustainability policies have been successful in keeping Washington off the fiscal roller coaster that characterized state spending in prior decades. That same focus on sustainable spending should be applied when crafting the 2019-2021 state budget.