Washington’s on-time budget performance this year in at least that respect lines up well with most states. Liz Farmer reports in Governing magazine that this year most states reached timely budget agreement, aided by one-party governance and steady revenue growth.

As of Tuesday, 39 states had either passed a budget or had one awaiting a governor’s signature, according to the National Conference of State Legislatures. That’s a far cry from 2017 when 11 states started the fiscal year without a signed budget and another 10 had to call a special session to approve one after missing the initial deadline.

The drama was partially the product of divided government and tight finances — both of which are less of an issue today. The rise of one-party states has led to less political gridlock….But the bigger reason so many states have passed a budget without theatrics this year is that revenues are in good shape.

Washington fits the mold, with Democratic control of both chambers and the governor’s mansion and strong revenue growth. The National Association of State Budget Officers (NASBO) recently published its fiscal survey of the Staes, the source for Farmer’s story. The summary report says,

And there we see Washington’s departure from the norm, for no one would call the state’s 18.4 percent biennial budget growth and billion dollar tax increase “moderate,” however anyone feels about the merits of the fiscal actions. We’ve previously written that Washington has experienced the fifth most rapid expenditure expansion since the 2008 recession.

Although it’s not a perfect comparison – Washington adopts a two-year budget, the NASBO report looks at annual changes – the two graphs below suggest the magnitude of the contrast between Washington and all states. The first is from the NASBO report, looking at budget growth since 2008.

The second is a Washington Research Council presentation of biennial spending growth here. The steep post-recession hike is apparent. 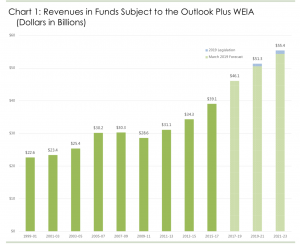 The data-rich NASBO report will make for good reading for fiscal wonks (likely not a large population). We’d cite this from the report’s conclusion:

Despite favorable revenue conditions, governors and other state officials are mindful that some of the recent revenue gains, especially from non-wage income, are likely temporary, and therefore are choosing to direct some new money in fiscal 2020 budgets towards one-time expenditures including paying down debt and making extra pension fund contributions. State officials are also continuing to bolster their states’ rainy day fund balances in anticipation of the next economic downturn.

As we warned repeatedly, it’s coming.