The Employment Security Department has released another grim claims report.

Sjoblom’s graph shows how different this recession is from others in the spike of UI claims. 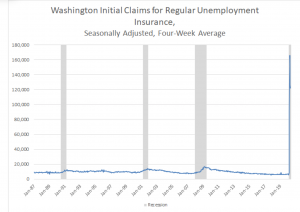 In The Seattle Times, Paul Roberts notes the “grim milestone” of passing the 1 million mark and writes,

More than a million workers in Washington have now filed for unemployment benefits or other related assistance since early March, a grim milestone as the state continues to grapple with the unprecedented economic damage from the coronavirus pandemic.

State officials expect claims for jobless benefits will decline over coming months as Washington continues to reopen its shuttered economy. But “for now, these [jobless numbers] represent our new normal,” Suzi LeVine, Employment Security Department commissioner, said at a press conference Thursday after the state released the latest claims data.

Oddly, Washington is an outlier.

Washington was among the few states reporting an increase in jobless claims. The nation as a whole saw 2.98 million initial unemployment claims last week, down 6.1% from the prior week, the Labor Department reported Thursday.

With the state slowly reopening for some businesses, we’ll see how quickly people are able to return to work.