There’s still time to comment on controversial overtime rule – or “super minimum wage” – proposed by the Department of Labor and Industries. L&I says in its news release that it is extending the comment period through Friday, September, 20. Apparently, quite a few people are weighing in.

Driven by a high level of interest, the Washington State Department of Labor & Industries (L&I) is extending the public comment period on its proposed changes to the state’s overtime rules.

This, then, is a good time to review the proposal. We’d again point you to this excellent video overview produced by the Association of Washington Business.

In one of our previous posts on the issue, we linked to this Washington Research Council analysis. The WRC writes,

Currently, workers must be paid overtime if they work more than 40 hours a week, but there are some exemptions—including for EAP workers. To be exempt, these workers must perform certain duties and earn more than $455 per week ($23,660 per year). (This is the current federal salary threshold; the current state threshold is $250 per week.)

Under the proposal, the salary threshold would be increased by steps (depending on employer size) until it is 2.5 times the state minimum wage for all employers beginning Jan. 1, 2026.

AWB has also prepared a two-page issue brief and a one-page overview. We recommend reading the short discussion. Here’s part of AWB’s material produced ahead of last month’s public hearings.. 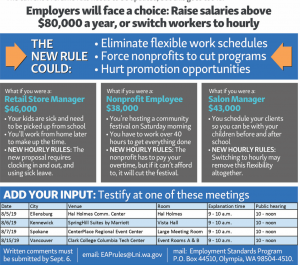 The final decision is expected in early December.

Comments can be sent by email to EAPrules@Lni.wa.gov or by fax at 360-902-5300. Find details on the proposed rules on L&I’s overtime rules webpage (Lni.wa.gov/OvertimeRulemaking).