Seattle tops the list of most educated big cities in the U.S., reports the Seattle Times’ FYI Guy Gene Balk.

As of 2017, 63 percent of city residents age 25 and older had a four-year college degree. Among the 50 largest cities in the country, we’re the only one to hit that 60 percent mark — something we first achieved in 2015. 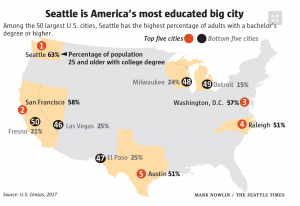 That’s good. Companies seek out cities with an abundance of educated workers. And educated workers go where the jobs are. It’s a virtuous cycle. One way to close the skills gap is to bring the skilled workers to employment centers. And that’s a battle Seattle, thus far, has been winning.

Balk, then, points out a theme of ours.

Successful cities like Seattle draw thousands of college-educated people from all over the country and the world to work in tech and other sectors.

That’s great — but are we producing enough of our own college grads in Washington? Compared with other states, it appears that we don’t actually send a high percentage of our high-school grads off to college.

We’ve written of the importance of boosting postsecondary education attainment, “the credential is essential,” and increasing college completion.

Balk’s short articles provides good data points to back up the argument that Washington must do better. For example,

Both a state policy agency (the Washington Student Achievement Council) and a business group (the Washington Roundtable) believe more students need to enroll in some kind of training or degree program after high school to keep Washington’s future economy humming along.

And to expand opportunities for Washington’s young people to succeed in that humming economy.