The Associated Press reports on a new study from Pew with good news about state pension plans.

Pension systems for state government workers across the U.S. are in their best shape since the Great Recession began more than a dozen years ago, according to a study released Tuesday.

The Pew Charitable Trust report credits a booming stock market over the past year as well as states’ longer-term steps, which include boosting taxpayer contributions to public pension funds and reducing promised retirement benefits, particularly to newly hired workers.

“The better decisions, the fiscal discipline, is something that states can keep doing next year and the year after,” said Pew’s David Draine, one of the report’s authors. “You can’t hope for once-in-a generation returns to occur again.”

The health of public pension systems resonates beyond government employees. When the systems are poorly funded, state and local governments have to consider raises taxes or cutting basic government services to pay retirees’ pensions.

These maps from the Pew report shows the improvement. 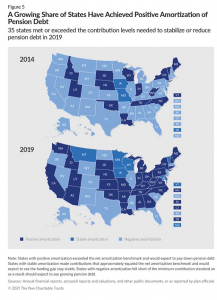 There’s a lot of detail in the report. Notice that Washington is one of the states showing improved funding. Here’s the crux:

According to projections by The Pew Charitable Trusts, the gap between the cost of pension benefits that states have promised their workers and what they have set aside to pay for them dropped in 2021 to its lowest level in more than a decade. Pew estimates that state retirement systems are now over 80% funded for the first time since 2008.

Such progress would be significant in any year, but the improvement in fiscal 2021 occurred during a recession in which many analysts predicted that revenue losses related to the COVID-19 pandemic would increase retirement fund shortfalls. Instead, Pew found an increase in assets of over half a trillion dollars in state retirement plans, fueled by market investment returns of more than 25 percent in fiscal 2021 (the highest annual returns for public funds in over 30 years) and substantial increases in contributions from taxpayers and public employees to pension funds.

These contribution increases, which came after years of states shortchanging their systems, are part of an upward trend over the past 10 years. Pew research shows that contributions have increased an average of 8% each year over the past decade, boosting assets and paying down debt. In the four states with the most financially troubled pension systems—Illinois, Kentucky, Pennsylvania, and New Jersey—contributions increased by an average of 16% a year over the same period.

Nearly every state has also enacted benefit reforms to lower costs, including cutting benefits for newly hired public workers. Officials in many states have also become more disciplined about managing pension finances, using tools such as stress testing to determine how twists and turns in the economy might affect pension funds.

As a result, Pew found that for the first time this century, states are expected to have collectively met the minimum pension contribution standard.1 This means that even before the market rally during the pandemic, payments into state pension funds were sufficient to cover current benefits and reduce pension debt, a milestone called positive amortization.