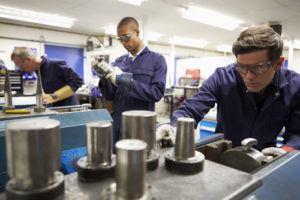 Fresh off the heels of the third straight month of manufacturing job growth, the National Association of Manufacturers (NAM) today released the first Manufacturers’ Outlook Survey since President Donald Trump took office. The survey shows a dramatic shift in sentiment, with more than 93 percent of manufacturers feeling positive about their economic outlook. This is the highest in the survey’s 20-year history, up from 56.6 percent one year ago and 77.8 percent in December.

NAM president and CEO Jay Timmons attributes the improved attitudes to expectations about regulatory reform and other business environment changes.

The survey shows not only a positive outlook but also that concerns about the business environment have dropped. When manufacturers were asked to identify top challenges to their business, concerns about the business environment fell to third place. This had previously been respondents’ top concern since the question was added to the survey in 2011….

A full write-up of the survey is available here.

NAM also reports that the latest data from the Federal Reserve show a March dip in production. Overall, however, conditions look stable.

The Federal Reserve said that manufacturing production pulled back in March, ending six straight monthly gains. Output in the sector declined by 0.4 percent, led lower by a sharp reduction in motor vehicles and parts production, down 3.0 percent, among others. Yet, even with the reduced figures in March, the data continue to reflect improvements in the manufacturing sector, with activity turning a corner after struggling for much of the past two years from a number of economic headwinds. Indeed, manufacturing production has increased 0.8 percent over the past 12 months, down from 1.0 percent in the prior release but also definite progress from declining year-over-year rates as recently as October.

Overall, good news for manufacturing translates to good news for the economy generally, as the sector has a strong employment multiplier. Sustained optimism and increased production would be a healthy antidote to concerns about the durability of the recovery.