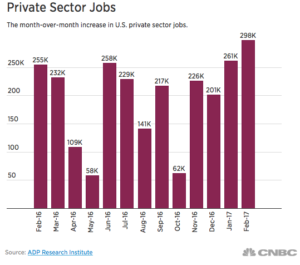 Companies added jobs at a blistering pace in February, with a notable shift away from the service-sector positions that have dominated hiring for years, according to a report Wednesday.

Employment in the private sector surged by 298,000 for the month, with goods producers adding 106,000, ADP and Moody’s Analytics said. Construction jobs swelled by 66,000 and manufacturing added 32,000.

The Associated Press reports an uptick in small business hiring.

Small business owners had indicated their plans to expand. A survey by the advocacy group the National Small Business Association done in January showed 43 percent of owners expected to hire in the next 12 months, up significantly from 33 percent during the summer. Other surveys have also shown big increases in owners planning to bring on more workers.

Washington has boasted consistent strength in economic growth, often near the top among state economies. If the national economy is moving into overdrive, we expect the trend to boost further our state performance. Good news.