Consider this story one of confirmation. We’ve previously reported on Washington’s economic growth, booming metro region, and prospects for future gains. So it’s not surprising that our state is a popular destination for domestic in-migration. The National Movers Study, a United Van Lines product, documents the trend. Three of the top states are in the Pacific Northwest, the study finds, with Idaho taking first place.

According to the results of United Van Lines’ 43rd Annual National Movers Study, which tracks customers’ state-to-state migration patterns over the past year, Idaho saw the highest percentage of inbound migration among states experiencing more than 250 moves* with United Van Lines: 67.4 percent…

Oregon, at 65.7 percent inbound, followed Idaho as the second most popular moving destination nationally, experiencing more than 2,800 total moves. States in the Mountain West and Pacific West regions, including Arizona (63.2 percent), Washington (59.5 percent) and New Mexico (43.9 percent), continued to see high percentages of inbound moves. Each of these states ranked among the top inbound states in the study’s 2019 data.

The Tax Foundation has mapped the migration data. 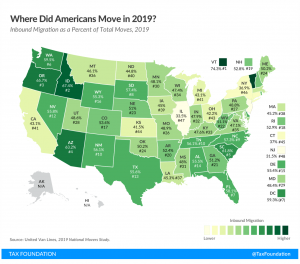 States compete with each other in a variety of ways, including attracting (and retaining) residents. Sustained periods of inbound migration lead to greater economic output and growth. Prolonged periods of net outbound migration, however, can strain state coffers, contributing to revenue volatility as economic activity and tax revenue follow individuals out of state.

And, of course, she cites a tax hook:

For many individuals, job opportunities, family considerations, and lifestyle preferences are among the primary factors driving a decision to move out of state, but tax considerations can certainly play a role…

Four of the 10 worst-performing states on this year’s [State Business Tax Climate] Index are also among the 10 states with the most outbound migration in this year’s National Movers Study (New Jersey,  New York, Connecticut, and California).

As Cammenga says, states compete in a lot of different ways. Establishing and maintaining a tax and regulatory climate is a good way to keep the moving vans coming in.