As the chart shows, the sales growth is dramatic. 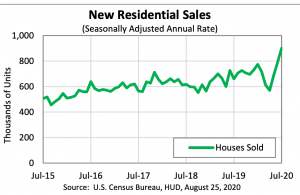 New home sales for July were reported at 901,000 on a seasonally adjusted annual rate basis (SAAR). Sales for the previous three months were revised up, combined.

This was well above consensus expectations, and this was the highest sales rate since 2007. Clearly low mortgages rates, and low sales in March and April (due to the pandemic) have led to a bounce back in sales in May, June and July.  Favorable demographics (something I wrote about many times over the last decade) and a surging stock market have probably helped new home sales too.

Important: No one should get too excited.  Many years ago, I wrote several articles about how new home sales and housing starts (especially single family starts) were some of the best leading indicators for the economy.   However, I’ve noted that there are times when this isn’t true.   NOW is one of those times.

For the fifth month in a row, home prices around Seattle rose faster in June — 6.5%, year-over-year — than any of the nation’s other top 18 metro areas, save Phoenix, according to new data from S&P CoreLogic Case-Shiller Home Price Index. That’s more or less the same rate of growth we’ve seen since spring.

This month’s surplus was once again due to real estate excise tax (REET) collections, which came in $36.0 million (59.3%) higher than forecasted. Seasonally adjusted sales increased sharply for another month (see figure), while the forecast had sales growing more slowly from their levels of April and May. Sales of large commercial property (property valued at $10 million or more) totaled $638 million, up from last month’s total of $195 million. Cumulatively, REET collections are now $60.4 million (52.5%) higher than forecasted.

Again, sustainability remains a concern. But it’s good while it lasts.